Please join us in congratulating Fiona MacPhail as the recipient of the Dr. Gene DiStasio Scholarship for 2020.

Fiona will be attending New York University to study drama at the Tisch School of Arts where she hopes to double major in Italian studies as well.  At Winthrop High School, Fiona participated in drama, ran track, and cross country.  In her spare time, Fiona likes to sing, make collages, read, and play piano. 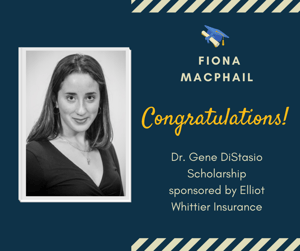 Elliot Whittier Insurance has adopted the Dr. Gene DiStasio Scholarship fund to assure that a grant of $500 may be awarded annually to a graduating senior from Winthrop High School in perpetuity.

The scholarship was established in 1998, from proceeds of the Oceanside Big Bank & Jazz Fest, in loving memory of jazz trombonist and Winthrop Orthodontist, Dr. Gene DiStasio.

Dr. Gene encouraged Paul Roy, a former principal at Elliot Whittier to produce the first free outdoor concert at Hannaford Park in Winthrop in 1994.  Gene played trombone for the Kenny Hadley Big Band that year.  He died in 1995.

A photo of Dr. DiStasio and a list of past recipients can be seen here.