Each year, hurricanes threaten with damaging winds and rain.  The meteorologists at the NOAA (National Oceanic and Atmospheric Administration) Climate Prediction Center set forecasts every year for a variety of weather events, not the least of which is their use of statistics to determine when hurricane seasons are expected to be above, near, or below-average. 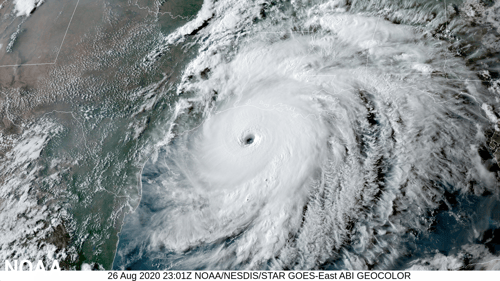 NOAA's GOES-East satellite captured this image of Hurricane Laura on August 26, 2020 as it approached the Gulf Coast (NOAA) According to Secretary of Commerce Gina Raimondo, "Now is the time for communities along the coastline as well as inland to get prepared for the dangers that hurricanes can bring.  The experts at NOAA are poised to deliver life-saving early warnings and forecasts to communities, which will also help minimize the economic impact of storms."

2020 was a record-breaking season and serves as a reminder to all residents and business owners in coastal regions or areas prone to inland flooding to be prepared for the 2021 season.

With the Atlantic hurricane season starting on June 1, now is the time to get ready.  You can download the FEMA app and sign-up for alerts and access preparedness information.  You might want to consider purchasing flood insurance, but be aware there is normally a 30-day waiting period for flood insurance to become effective.  You can request a quote for flood insurance here.